Home Projects Out of the Flames: Reconstructing the Debates around the Amazon Rainforest Fires Online

What is Out of the Flames?

The technological revolution is transforming every aspect of human lives. It has become common practice to find news on Twitter, get DIY tips on YouTube, and make consumer decisions by checking the reviews on Amazon. As our physical and digital worlds blend more than ever before, the way we consume information and construct knowledge has evolved. While digital platforms have traditionally been considered as the channels to share information, they are now transforming into a place where different publics emerge and engage with various environmental, economic and social issues.

Through Out of the Flames, we explored online engagement and public narratives around the 2019 Amazon rainforest fires as a way to discover which issues have been brought up together with the event. Using social media data from Twitter, Facebook, Google, Instagram and YouTube, the project investigated the different public narratives that circulated online, and explored forms of engagement, participation and experience that emerged around this event at the peak of its international media coverage. By taking a new approach to exploring global ‘talking points’ online, the project has shown us that social media is not just a gateway to spreading and obtaining information. It is a site where public engagement takes place.

Based on the analysis results and visualisations, the project facilitates dialogue with and among researchers, journalists, policy-makers and other experts for further reflection and insight sharing.  Anyone interested in interpreting the selected analysis pieces is invited to share their inputs through this form.

The final report can be found here and the dedicated website with key outcomes here.

Out of the Flames was implemented in collaboration with the Public Data Lab, an interdisciplinary network, under NewGo!, a start-up project for the European Forest Institute’s Governance programme.

Our series of analyses brought a wide range of new insights into the reality of public engagement in the digital age. Social media platforms have become sites to share concerns, convey feelings and raise awareness about other related issues. 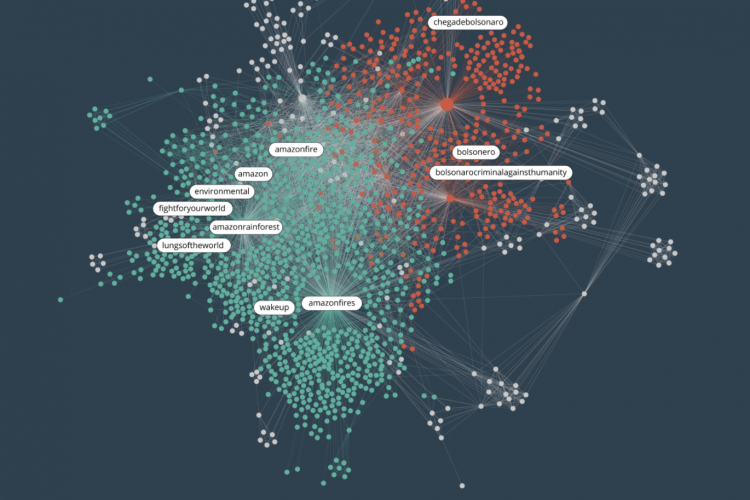 For example, hashtags (e.g. #AmazonRainforest, #landgrabbing) can act as an indicator of the issues and concerns of different publics and social media users. They help us understand how people brought up and associated different issues with the main event. In our analysis that looked at the relations between hashtags of the Amazon rainforest fires, it was possible to observe different voices, concerns and positioning around a wide variety of forest governance issues, involving international and national political, business and other public figures.

For example, political issues that were widely covered by the international media have emerged (e.g. a ‘war of words’ between Bolsonaro and Macron) and national political issues in Brazil, mainly criticising the Bolsonaro government. The latter was identified by our consultations with journalists who spotted Portuguese language hashtags like #panelaço, a form of protest against Bolsonaro. Interestingly, a few pro-Bolsonaro hashtags like #vivabolsonaro have also appeared in our analysis, indicating a minority of those promoting the narratives of the Brazilian government.

Apart from political issues, various issues associated with forest governance have been identified, such as deforestation drivers (#cattleranching, #beef, #soybeans and #palmoil) and meat consumption (#gowithoutbeef, #govegan, and #stopeatingmeat). These results show that the Twitter publics have made the direct links between the Amazon rainforest fires and consumer responsibilities, knowing that these commodities drive deforestation and the fires are directly linked to deforestation as part of land clearing. 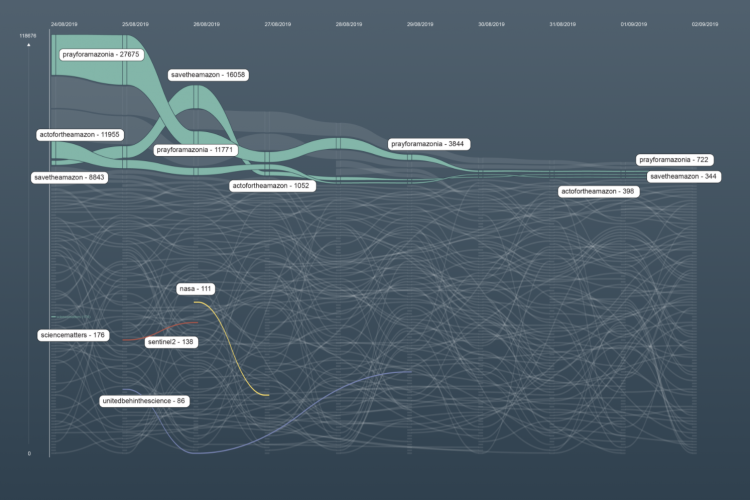 Exploring the role of science online beneath the surface

Our analyses have also identified the different ways ‘science’ is brought up on social media. In many instances, scientific voices were almost absent, marginal, present at the periphery or only after the “peak” in our Twitter analysis. For example, when looking at the top tweets for the number of retweets, scientific voices emerged at the top but only when the number of tweets started to decrease in the peak period. When looking at the top hashtags, there were only a few science-related hashtags such as #sciencematters, #sentinel2, #nasa, #unitebehindthescience.

However, while most scientists found themselves at the periphery of Twitter conversation, there was an exception of one academic who was also one of the most active users gaining high visibility.  This account was also the most “influential” user in this set, receiving the highest number of mentions, more than any other top accounts. Although this is just one example, it shows that it is possible to gain visibility for a specialist account by being active on Twitter.

When the Amazon rainforest fires became an international issue in the media, we came across the misleading claim, “20% of the world’s oxygen is produced in the Amazon”. We wanted to see how these claims have been addressed in the media articles circulated on Twitter and looked at 23 freely accessible, English-language media articles circulated with the claim. In our sample, as we expected, debunking stories had the tendency to refer to scientific sources more than the articles which treated the misleading claim as (potentially) correct. What was interesting to see in our article sample is that some sources received significantly more visibility compared to other scientific sources across several stories. A further study is needed to look into the patterns of media sourcing to see if there is recycling of scientific sources in news reporting.

→ Check the detailed key outcomes linked to our hashtag analysis, check Issue Story 2: Exploring the role of science online beneath the surface. 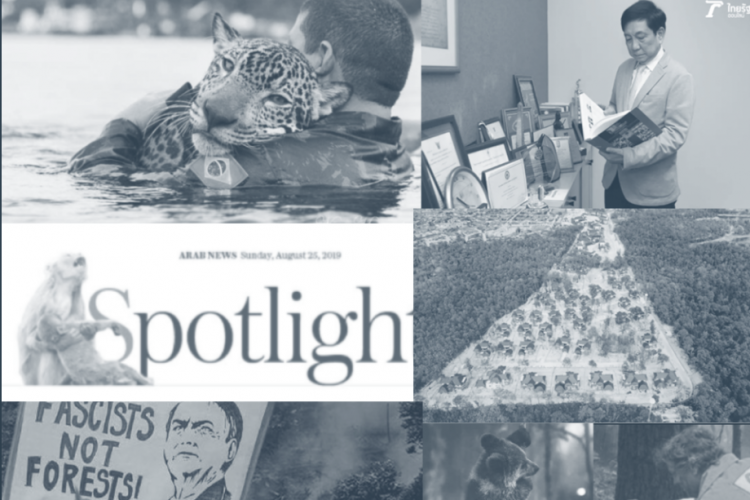 Finally, we have also observed various types of online recycling practices. For example, various types of generic images have been collected showing fires and animals in our analysis. The most visible images were animal photos, some of which portray endemic species to the Amazon, and others coming from completely unrelated places, including koalas from Australia and monkeys in India.

Recycled images shared by public figures appeared several times in our analysis. For instance, an old image of burning forests tweeted by Macron and other users has appeared multiple times on Facebook and Instagram. There were other forest-related images from various locations globally, including one from Thailand.

In our analysis, we have also observed that the media played a role in prolonging the life cycle of recycled media and misleading claims. For example, CNN published at least eight stories promoting the misleading claim, “20% of the world’s oxygen is produced in the Amazon”.  Another example is Arab News, which treated the misleading claim of the Amazon producing 20% oxygen as a confirmed fact and used a picture of monkeys taken in India back in 2017.

One important takeaway from looking at online recycling practices is that the re-purposing of such images is not in itself inherently problematic, as it can often be assumed that an image is being presented as a literal representation of events. Image reuse is part of professional image editorial and digital culture, and social media user practices carried out in a day-to-day context. 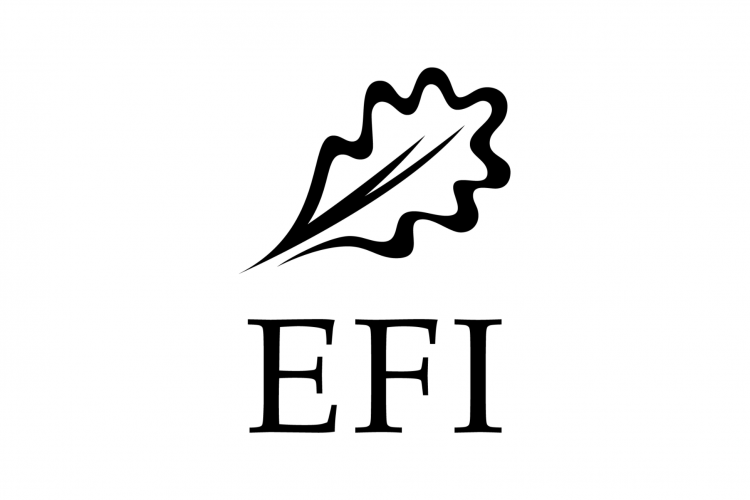 The European Forest Institute (EFI) is an independent international science organisation which generates, connects and shares knowledge at the interface between science and policy. EFI has 29 member countries who have ratified the Convention, and c.130 member organizations in 40 countries, working in diverse research fields. 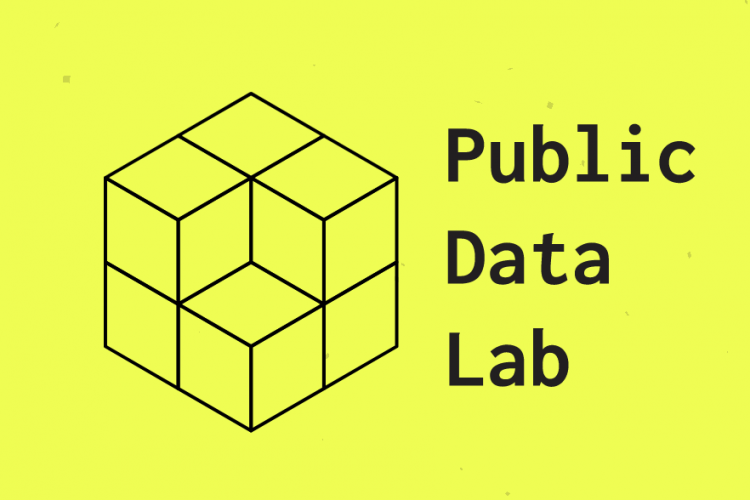 The Public Data Lab is an interdisciplinary network of leading researchers specialised in digital humanities, network science and design studies. It seeks to facilitate research, democratic engagement and public debate around the future of the data society. For more, visit this page. 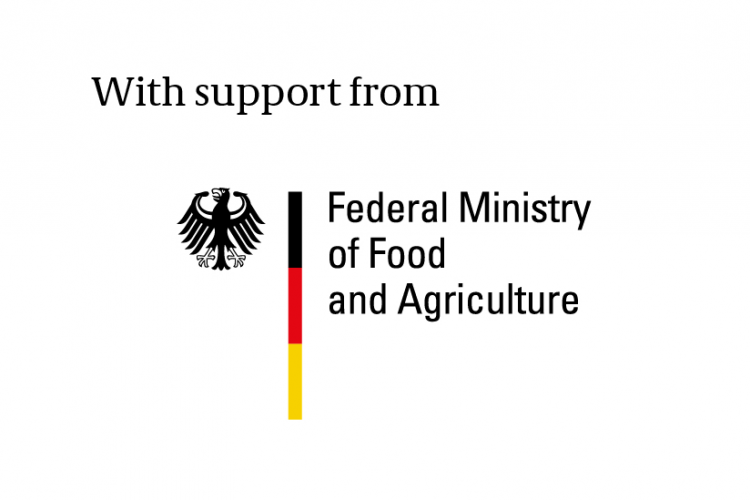 This project has been supported by the German Federal Ministry of Food and Agriculture.